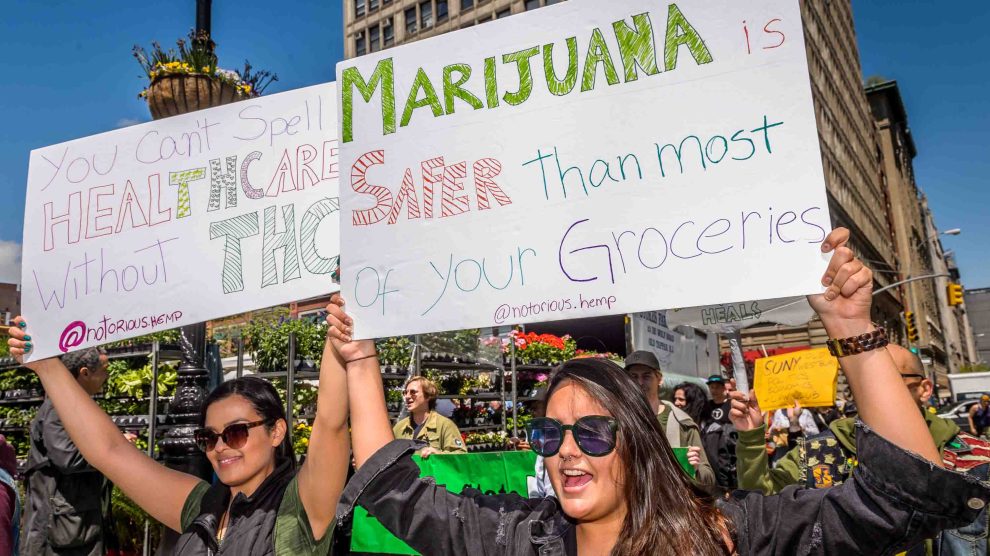 From time to time the House passes a bill that would never in a million years be approved by a Republican Senate.

There was a House bill to raise the federal minimum wage to $15. Nope! There was another that would have mandated universal background checks on gun sales. Sorry. And yet another “to prohibit discrimination on the basis of sex, gender identity, and sexual orientation”—real controversial stuff. Fuggedaboutit!

Today, the House added a new bit of progressive legislation to that list: a bill that would decriminalize marijuana and expunge nonviolent weed-related convictions, which disproportionately affect people of color.

The legislation comes after five states approved marijuana reforms on Election Day, as my colleague Jackie Flynn Mogensen reported last month. Thirty-six states to date have legalized medical marijuana, and 15 have approved its recreational use.

No matter how you feel about the drug, the potential criminal justice benefits of legalization are undeniable. Even though people of different ethnicities use and sell weed at similar rates, Black people are nearly four times more likely than white people to be arrested for possession, according to the ACLU. The House bill would try to rectify this inequality by creating grants to provide job training, legal aid, and substance abuse treatment to people convicted of marijuana offenses. It would also offer funding to low-income and nonwhite business owners in the commercial marijuana sector. The bill may not become law, but it’s a big step in progressives’ push to alter the public image of cannabis from a dangerous, addictive substance to a medicinal herb that’s safer than alcohol.

This post was brought to you by the Mother Jones Daily newsletter, which hits inboxes every weekday and is written by Ben Dreyfuss and Abigail Weinberg. It regularly features guest contributions by our much smarter colleagues. Sign up for it here.