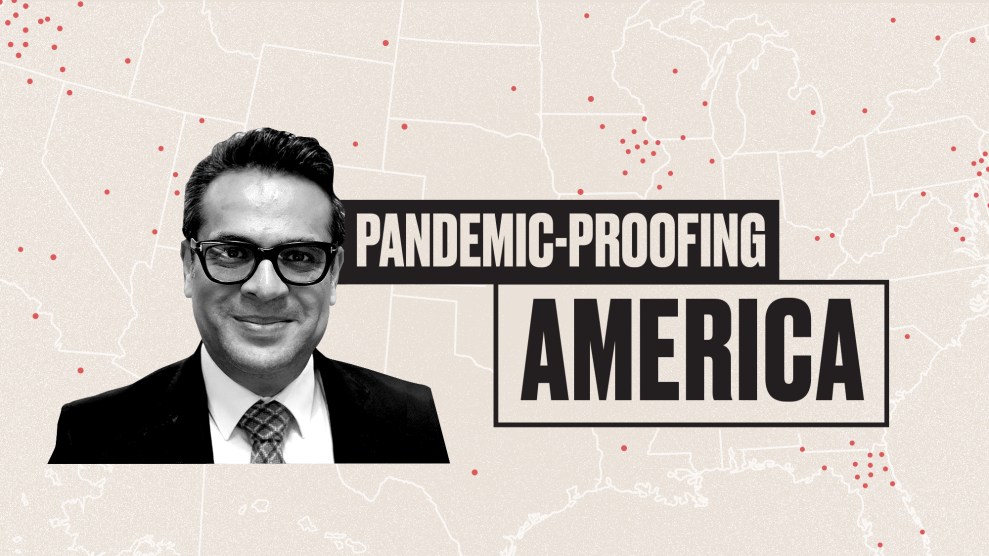 Saad Omer, an epidemiologist and infectious disease specialist, directs the Yale Institute for Global Health. His background has positioned him as an authority on the medical and social dimensions of the COVID-19 pandemic. An expert on respiratory diseases and the immunizations that prevent them, he’s also done extensive work investigating the political, psychological, and societal factors that influence individuals’ trust in vaccines. This summer, Omer was a member of the Committee on Equitable Allocation of Vaccine for the Novel Coronavirus at the National Academies of Sciences, which released guidelines for prioritizing groups of Americans to vaccinate against COVID-19. Omer and I spoke about how Biden might change course on the pandemic response—from the importance of bipartisan endorsement of a COVID-19 vaccine to restoring the CDC to its former glory—and the critical importance of consistent and credible communication during a pandemic.

On letting scientists lead: The first thing Biden can do is to make sure the career people are empowered. There is a lot of muscle memory at CDC and at FDA. This is what following science looks like in practice. We have a huge level of capacity. We have some of the best-trained people. Let them handle it. There has to be inclusion of the career folks. These are not just bureaucrats, they are the best in the world. They should get a free hand in terms of setting guidelines.

I hate to use a militaristic term, but fighting a pandemic is not just a big war, it’s a lot of little battles. What are the guidelines for indoor transmission? What are the guidelines, for example, specifically for cruise ships? At the policy level, there needs to be radical transparency. Not only what the government is saying, but why they’re saying it. People can absorb information. If it’s worth implementing, it’s worth defending.

On how to get the message right: I can see why people have concerns that the name “Operation Warp Speed” conveys speed without rigor. Operation Warp Speed has done a good job of developing products—the vaccines are very promising. But if they create a vaccine, are people going to take them? We developed a $10–12 billion vaccine program, and we didn’t realize what the message sent by its name would be. Why is this an afterthought? Science communication just can’t be an afterthought. There’s a whole infrastructure training people to do this kind of thing. Dr. Fauci is great. He’s a natural communicator. But we need a whole infrastructure of communicators.

We need a mainstream, transparent, regulatory recommendation process. Then, you engage with communities who are disproportionately impacted, by engaging with leaders of those communities. You don’t patronize people. This is not your run-of-the-mill vaccine hesitancy—a lot of people who would take other vaccines are concerned about this one, because of President Trump’s endorsement of hydroxychloroquine. I think there’s been a course correction at FDA, but a lot of people don’t know that. We need to send the message that we’re back to what we’ve been doing for decades.

Before the election, we did a study with colleagues in political science, where we randomized people into two groups. We asked one group if they would take and have confidence in a vaccine approved a week before the election, and we asked the other the same question about a vaccine approved in December. There was a significant difference between the two groups—the December one was much more popular. We found that having a depoliticized process improves trust in your outcome. We also asked questions about what factors would increase trust in vaccines. We found that the biggest impact across the board in building confidence was Dr. Fauci. If a vaccine is endorsed by Trump and Pelosi together, that also moves people. The idea is to have bipartisan endorsement. This is not a fantasy. If there is a direct place for outreach where we have evidence, we can build trust. This would be a good starting point.

On the importance of coordinating the federal and local response: Our model of public health used to be the envy of the world, and one reason was that it was an example of cooperative federalism. In other countries you have really strong ministries of health, but there are local issues. With the CDC, the system we have is that the state and local health departments are very strong. They have a lot of power. But they’ve been deprived of a lot of resources. They need support from a strong technical agency in the form of the CDC. We need the whole of government to respond to this pandemic. It should not just be a federal response, it should be a national response, working with state and local health departments.

This was not supposed to be a model where everyone was just on their own. That’s what’s happening now. States are trying to figure it out, but they could use a central template rather than everyone reinventing the wheel. It’s supposed to be that state and local health departments know their communities.

We have overcome challenges in the past. HIV hasn’t been eradicated, but we’ve reduced rates and prevalence. We’ve eliminated polio. We still have tuberculosis, but not at the level that it used to be. It’s not like we started public health in January 2020. There is a whole history of doing these things well.